New app to communicate better with our customers

Issue We emailed customers who didn't needed to be emailed. Which was a mistake. But we also hear customers says that we need to communicate more. Solution To solve this problem we want to have a separate app (Click on screenshot to see a new icon on the bottom left). Companies can control: Who… 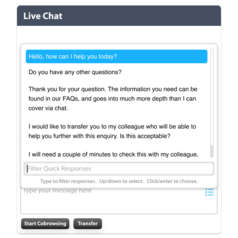 The chat experience for the website visitor can be more personal. Especially with the rise of chatbots. We hear more often that visitors are asking questions like, are you a bot? To eliminate these questions and make it more personal we can add a photo that the visitor will see on top of their chat…

Emojis can be powerfull and also misinterpreted, for example: Perfunctory: How are you? Friendly: How are you? 😊 Creepy: How are you? 😉 Overly intimate: How are you? 😛 With the right guidelines we believe it makes it more personal so want to add Emojis in our Live Chat. Have you thought about how… 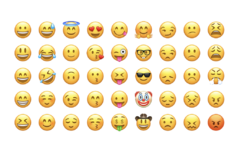 We want to introduce another way in which chats can be initiated by customers. In some situations it is better to immediately to connect to a support agent, before the customer types a question. When the customers want to ask a question, they don't have to formulate a question first, before trying… 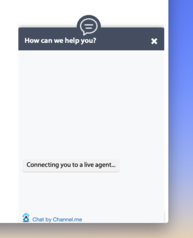 Issue Supervisors can't see exactly how many contact center agens are logged in, how many are active chats do they handle etc Solution New app that show live how many active chats are there per agent and per group.

Issue Having to do the same steps over and over again in the Chat History app. The Idea Create a search that you think you will want to use again, you can save it. Search on keywords, NPS rating, topics or groups.

An API that will supports the following types of chats: Closed chats Missed chats   https://channel.me/page/598834/chat-history-api

When supervisors, marketeers , and managers want to view the chat history they currently have to access via the chat system. Unfortunately, this means that when they open chat they become an available agent on the chat system and start to receive chat requests. For high-traffic websites, this can…

Tuesday 31 October the server had a hardware failure. Two banks of defect memory. After replacement of the memroy we still had the same issues and we replaced the whole server. Unfortunately this new server also had a memory error. We needed to take serious action and quickly moved to a different server we had to configure from scratch.

In order to prevent that a hardware or data-center problem can stop the channel.me service we have prepared two different servers in separate area's. This allows us to easily switch from server A to server B if one server fails or when there are problems in the area where the server is located.

But it even got worse, 9 November the power went down at our (DNS) domain provider. So our backup plan of two different servers that we could easily switch didn't work, why? Even if our new servers are running, they where not reachable because the power failure at our DNS domain provider. A DNS domain provider is like a phone book, it tells everybody where to send traffic for channel.me needs to. Server A or server B.

How can you assure this will not happen again?

Is there any data lost?

No, we had a good backup plan and could rebuild a new server from scratch.

We will also start posting updates on twitter:
https://twitter.com/Channel_me

Any other questions or feedback, let us know below: